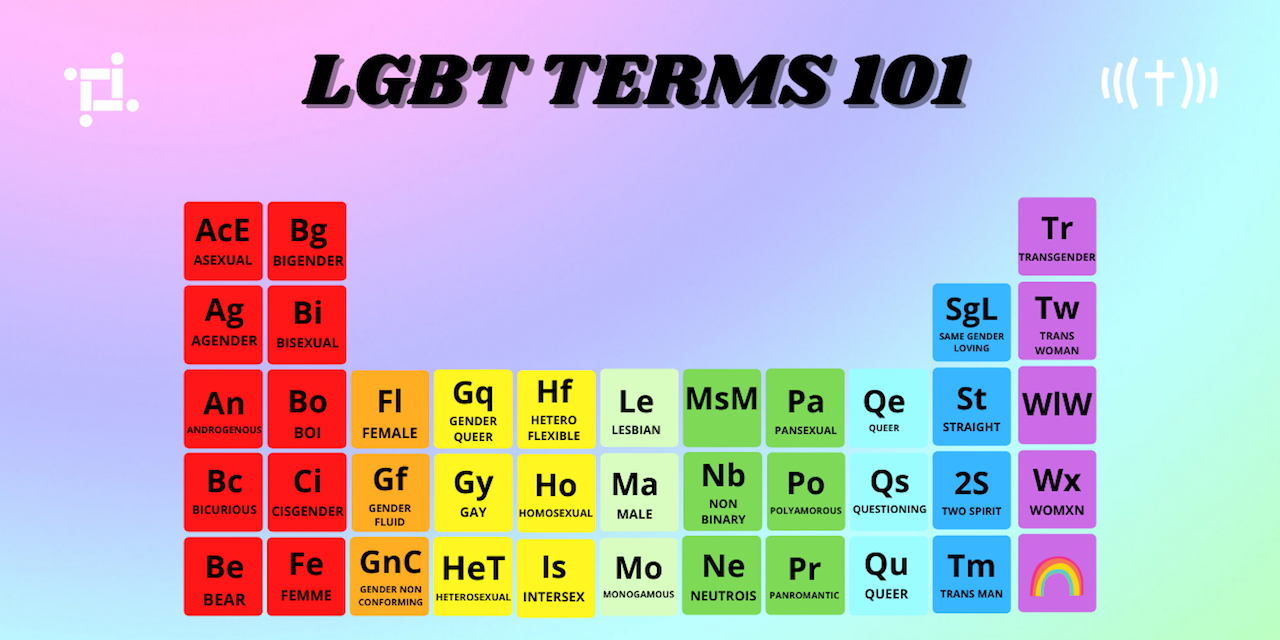 At Believe Out Loud, we uplift and honor all identities and preferences within the LGBT community. Using the correct terminology is an important way of dignifying LGBT people and respecting self-identification. Here is a brief list of definitions of gender identities and sexual orientations to help better understand and celebrate the diversity within our community:

Agender
“A person who does not identify as having a particular gender; genderless.” (Them)

Androgynous
“Having physical elements of both femininity and masculinity, whether expressed through sex, gender identity, gender expression or sexual orientation. Androgyne (pronounced an-druh-jain) is another term for an androgynous individual.” (PFLAG)

Bear
“A gay or bisexual man who has facial/body hair and a cuddly body; an umbrella term that is often defined as more of an attitude or sense of comfort with masculine attributes.” (Montclair State University LGBTQ Center)

Boi
“A person who expresses or presents themselves in a culturally/stereotypically masculine, particularly boyish, way; one who enjoys being perceived as a young male and intentionally identifies with being a ‘boy’ rather than a ‘man.’” (Montclair State University LGBTQ Center)

Femme
“A person who is feminine of center in dress, attitude, and/or presentation. It is often, but not exclusively, used in a lesbian context. Often on a spectrum from butch (see Butch) to femme or stud (see Stud) to femme.” (PFLAG)

Gender non-conforming
“A term for those who do not follow gender stereotypes. Often an umbrella for nonbinary genders (see TGNC). Though fairly uncommon, some people view the term as derogatory, so they may use other terms including gender expansive, differently gendered, gender creative, gender variant, genderqueer, nonbinary, agender, genderfluid, gender neutral, bigender, androgynous, or gender diverse.” (PFLAG)

Gender fluid
“Individuals whose gender varies over time. A gender fluid person may at any time identify as male, female, agender, or any other non-binary identity, or some combination of identities.” (University of Massachusetts Stonewall Center)

Gender queer
“Individuals who identify as neither male nor female (but as another gender), as somewhere in between or beyond genders, or as a combination of genders.” (University of Massachusetts Stonewall Center)

Intersex
“Intersex is the current term used to refer to people who are biologically between the medically expected definitions of male and female. This can be through variations in hormones, chromosomes, internal or external genitalia, or any combination of any or all primary and/or secondary sex characteristics. While many intersex people are noticed as intersex at birth, many are not. As intersex is about biological sex, it is distinct from gender identity and sexual orientation. An intersex person can be of any gender identity and can also be of any sexual orientation and any romantic orientation.” (PFLAG)

Neutrois
“Individuals who identify their gender as neutral or null. They may also identify as ‘agender.’” (University of Massachusetts Stonewall Center)

Non-binary
“An identity commonly used by people who do not identify or express their gender within the gender binary.” (Montclair State University LGBTQ Center)

Queer
“Term describing people who have a non-normative gender identity, sexual orientation or sexual anatomy—includes lesbians, gay men, bisexual people, and transgender people and allies. Since the term is sometimes used as a slur, it has a negative connotation for some LGBTQ people; however, others have reclaimed it and are comfortable using it to describe themselves.” (Montclair State University LGBTQ Center)

Questioning
“Describes those who are in a process of discovery and exploration about their sexual orientation, gender identity, gender expression, or a combination thereof. Questioning people can be of any age, so for many reasons, this may happen later in life. Questioning is a profoundly important process, and one that does not imply that someone is choosing to be lesbian, gay, bisexual, transgender, and/or queer.” (PFLAG)

Trans man
“A person who was assigned female at birth, but who identifies as male. Some trans men may intend to undergo physical changes to align their body with their gender identity.” (Montclair State University LGBTQ Center)

Trans woman
“A person who was assigned male at birth, but who identifies as female. Some transwomen may intend to undergo physical changes to align their body with their gender identity.” (Montclair State University LGBTQ Center)

Transgender
“Often shortened to trans, from the Latin prefix for “on a different side as.” A term describing a person’s gender identity that does not necessarily match their assigned sex at birth. Transgender people may or may not decide to alter their bodies hormonally and/or surgically to match their gender identity. This word is also used as an umbrella term to describe groups of people who transcend conventional expectations of gender identity or expression—such groups include, but are not limited to, people who identify as transsexual, genderqueer, gender variant, gender diverse, and androgynous. Trans is often considered more inclusive than transgender because it includes transgender, transsexual, transmasc, transfem, and those who simply use the word trans.” (PFLAG)

Two spirit
“A Native American term for people who blend the masculine and the feminine. It is commonly used to describe individuals who historically crossed gender. It is also often used by contemporary LGBTQ Native American people to describe themselves.” (Montclair State University LGBTQ Center)

Womxn
“A more progressive, more inclusive alternative to ‘women’ which is often used by people who might identify, for example, as non-binary and femme.” (CNN)

Asexual
“Often referred to as “Ace”, this is an umbrella term used for individuals who do not experience, or experience a low level, of sexual desire. This identity can include those who are interested in having romantic relationships, and those who are not. People of different sexual orientations and gender identities can be asexual.” (Outright International)

Bicurious
“An individual who identifies as gay or straight while showing some curiosity for a relationship or sexual activity with a person of the sex they do not favor.” (Montclair State University LGBTQ Center)

Bisexual
“A person who is emotionally, romantically, sexually, affectionately or relationally attracted to two genders or more, or someone who identifies as a member of the bisexual community.” (Montclair State University LGBTQ Center)

Gay
“An term used to describe people who are emotionally, romantically, and/or physically attracted to people of the same gender (e.g., gay man, gay people). In contemporary contexts, lesbian is often a preferred term for women, though many women use the term gay to describe themselves. People who are gay need not have had any sexual experience. Attraction and self-identification determines sexual orientation, not the gender or sexual orientation of one’s partner.” (PFLAG)

Heteroflexible
“A straight person who is most often attracted to people of a different gender from themselves but sometimes experiences attraction to people of the same gender as them. It is distinct from bisexuality. The term can have negative connotations of experimentation or indecision.” (PFLAG)

Heterosexual
“A person who is emotionally, romantically, sexually, affectionately or relationally attracted to members of the opposite sex or gender. Often called a “straight” person.” (Montclair State University LGBTQ Center)

Homosexual
“An outdated term to describe a sexual orientation in which a person feels physically and emotionally attracted to people of the same gender.” (University of California San Francisco LGBT Resource Center)

Lesbian
“A woman who is emotionally, romantically, sexually, affectionately, or relationally attracted to other women, or someone who identifies as a member of the lesbian community. Bisexual women may or may not feel included by this term.” (Montclair State University LGBTQ Center)

Monogamous
“A term referring to individuals who are intimate or involved romantically with one person at a time.” (PFLAG)

MSM
“An abbreviation for men who have sex with men. This term emphasizes the behavior, rather than the identities of the individuals involved.” (Montclair State University LGBTQ Center)

Panromantic
“Individuals who are romantically, but not necessarily sexually, attracted to others regardless of their gender identity or biological sex.” (University of Massachusetts Stonewall Center)

Pansexual
“Individuals who are attracted to others regardless of their gender identity or biological sex.” (University of Massachusetts Stonewall Center)

Polyamorous
“A term used to describe people who have the desire for multiple consenting intimate relationships at the same time. Also referred to as “ethically non-monogamous,” “polya” or “polyam;” there is a movement away from shortening polyamorous to “poly” since poly already means Polynesian. Consent and transparency are key components of polyamorous relationships.” (PFLAG)

Queer
“An umbrella term to refer to all LGBTQ+ people. It is also a non-binary term used by individuals who see their sexual orientation and/or gender identity as fluid.” (University of Massachusetts Stonewall Center)

SGL
“Same Gender Loving; this term is sometimes used by members of the African-American or Black community to express a non-straight sexual-orientation without relying on terms and symbols of European descent.” (Outright International)

Straight
“Pop culture term used to refer to individuals who identify as a heterosexual, meaning having a sexual, emotional, physical and relational attraction to individuals of the “opposite” gender/sex.” (We Are Family)

WLW
“Women Loving Women, refers to lesbian, bisexual, pansexual, or otherwise same-gender loving women (pronounced “W-L-W” or “wuh-luh-wuh”). Often used in communities of color, this specification grew from the historical notion that any woman who had emotional, romantic, intimate, and/or sexual partnerships with women as lesbians. As more understandings of sexuality have come to light, WLW has largely replaced lesbian as a unifying term to describe these women.” (PFLAG)

As society evolves, so do our ways of defining ourselves and how we choose to live out loud. This list is meant to serve as a starting point and may not include all terms used to describe different variations of lifestyles.