Home Voices Being alone with God: Reflections on The Soul of the Stranger
by Jude Wetherell 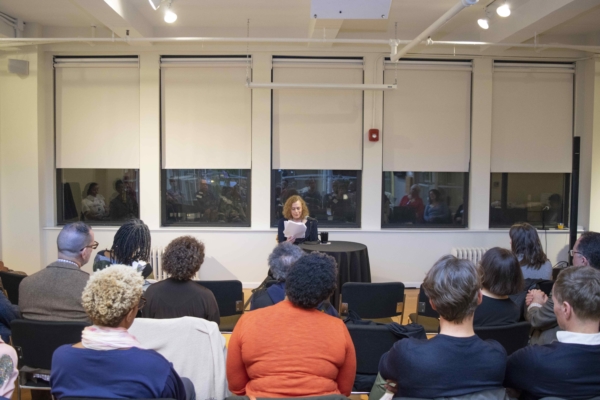 [Above: Joy Ladin reads at the Intersections office on March 10, 2020]

On March 10, 2020, Believe Out Loud and Intersections hosted author and academic Joy Ladin in our New York office for a reading and discussion celebrating her book The Soul of the Stranger: Reading God and Torah from a Transgender Perspective. It was an evening of contemplation—and joy—befitting the guest of honor. Ladin spoke movingly about her experience reconciling her sense of the ineffable, indefinable God who made her a transgender woman and the society she was raised in that expected and assumed conformity to strict gender roles.

At a time when trans bodies are subject to constant criticism, litigation and violence, Ladin’s work asks us to consider the ways in which all of us, regardless of gender identity, have trans experiences. As she puts it early in her book:

[Q]uestions transgender people face are questions we all face. Everyone, transgender or not, has to decide what parts of ourselves we will and will not live. Each of us has to decide when we can’t and when we must sacrifice our individuality for the sake of our families and communities.

“The Soul of the Stranger” moves into highlighting such transgressive—and arguably transgender—narratives in the lives of the central figures of the Torah, from Abraham rejecting his role in the tribal community into which he was born to Jacob usurping the birthright of his firstborn brother Esau. The scriptural reflections are intertwined with sections of memoir, as well as Ladin’s explication of her personal connection with a God beyond human understanding.

A few weeks before Ladin joined us at Intersections, I’d attended the National LGBTQ Taskforce’s 2020 Creating Change conference in Dallas. There, in a workshop called “Transgender in the Scriptures,” I experienced what I thought might be a pretext to “The Soul of the Stranger.” Masha Davis, a trans woman who serves as the Vice President of PFLAG Austin and on the board of the city’s chapter of Keshet, the LGBT Jewish organization, led us in an exploration of how the Torah scriptures that seem to most strictly enforce gender binaries—from “Male and female He created them” to the Deuteronomic prohibition of crossdressing—can be re-read from a gender inclusive lens if we turn to the original Hebrew. She also enumerated non-binary genders and gender experiences explicitly mentioned in both Jewish and Christian scriptures and texts. In the Talmud, there is language used to identify people who might have mapped, if imprecisely and intersectingly, onto our contemporary understandings of intersex, transfeminine and transmasculine bodies and identities. This includes the Hebrew term ayolonit, describing a person with female secondary sex characteristics who does not have reproductive capabilities. (In “The Soul of the Stranger,” Ladin mentions this in a footnote on Sarai/Sarah, whose womb remains barren into old age until God causes her to conceive). Further on, in the New Testament, the Gospel of Matthew speaks to “eunuchs…who choose to live like eunuchs for the sake of the kingdom of heaven” (Matthew 19:12, NIV). In early Christianity, the narrative of Saint Perpetua, persecuted for being a practicing Christian in Roman North Africa, describes her transformation into a man before martyrdom.

It was illuminating to have this thread of citations of non-binary gender in scripture when I approached “The Soul of the Stranger.” But it turns out that, rather than searching for concrete evidence of trans and gender nonconforming people, Ladin is interested more in that which isn’t knowable—indeed, that which is completely incomprehensible: God, Godself. This unknowability is precisely what compelled her to turn to the Divine as a child struggling with gender identity: “I made no sense in terms of binary gender; God made no sense in human terms at all.”

The titular “stranger” of the book refers to the “hyper-minority,” a term Ladin borrows from social science to describe individuals “too different to fit established roles and categories” in society. Ladin’s argument is that God in the Torah is the ultimate hyper-minority, a presence that communities “find…hard to accommodate…particularly when those accommodations require them to do things that do not make sense to them.” This is why the Israelites, not understanding the God who has fated them to wander forty years in the desert, begin to worship the golden calf: it is a god they can see, touch and control. Contemporary societies unable to see the sense in accommodating racial and ethnic minorities, LGBT people, disabled people and others living in a marginalized state make a similar turn away from the “stranger,” the problem—in New Testament terms, perhaps, the neighbor.

In contrast, in her relating to God from a very early age, Ladin describes a kind of intimacy between strangers, of being “alone with God.” This was not always a comforting intimacy:

One minute, God is creating the world, the next, God is destroying it with a flood…That was the God I knew—a loving, dangerous, incomprehensible God who kept me from killing myself one night and woke me the next morning to a life I couldn’t bear to live.

Yet it is the painful facing of God’s strange will that ultimately carries Ladin into embodying her true identity. “God never mistook me for the body others saw,” she says. “God knew who I truly was, and understood how alone I felt, because God, like me, had no body to make God visible.”

Later in life, Ladin describes identifying with the concept of a “‘feral Jew,’ a Jew whose sense of Jewishness was developed in isolation.” “The Soul of the Stranger” is a kind of record of, and reckoning with, this idiosyncratic, autodidactic faith. Reading from a queer Christian perspective, the book feels kindred to both historical and hypermodern texts about understanding God from the margins. The deeply personal, confessional nature of Ladin’s work brings to mind Julian of Norwich, the late medieval English anchorite who, secluded in the cell where she voluntarily spent much of her life, recorded her singular Revelations of encountering the crucified Christ. Five and a half centuries later, Julian’s “mother God” of encompassing love mirrors Ladin’s conception of a Divine uncontainable within the bounds of human gender norms. Julian possessed a unique, frequently anachronistic faith that centered on the joy and salvation inherent in the Passion, rather than the dour penitence and shame espoused by her medieval contemporaries. Ladin’s approach to scripture seems to share in this tradition: in its total departure from convention, it creates new possibilities for knowing God.

Ladin shares the impulse for trans exegesis with a more contemporary commentator on Christian texts: the writer Daniel Lavery, who came to prominence as an editor of the (now sadly defunct) humor site The Toast. Lavery has a preternatural knack for irreverent, transformative riffs on folklore and classic literature, including scripture; in The Toast’s archives, “#thebible” brings up such gems as “Bible Verses Where the Word ‘Thou Shalt Not’ has been replaced by ‘can u not.’” He came out as a trans man in 2018, a revelation and process he addresses through meditations on William Shatner, Greek mythology and reality TV in his newly released hybrid memoir/essay collection, Something That May Shock and Discredit You. Like much of his earlier body of work, the book is also steeped in Lavery’s upbringing as the child of a prominent Evangelical pastor. The first chapter is entitled, “When You Were Younger and You Got Home Early and You Were the First One Home and No One Else Was Out on the Street, Did You Ever Worry that the Rapture Had Happened without You? I Did.” A further selection is “Jacob and the Angel Wrasslin’ ‘Til Noon at Least,” which includes reflection on the God-stricken revelation of changing one’s name and identity (in the midst of a sudden interlude of homoerotic grappling).

Lavery is no longer religious, as this tongue-firmly-in-cheek tone might lead one to intuit. But his engagement with scripture is far from mocking. It is frequently loving and playful; just as often, it is profound and poetic, veering into a genre more akin to experimental theater. Lavery shares work-in-progress in an email newsletter; one entry from early March is a retelling of the death of Absalom in 2 Samuel. Lavery finds transmasculine resonance equally in Absalom’s grooming habits (haircuts are a frequent Lavery theme), and in his estrangement from his father, King David:

58. Once you walked out of the men’s room as your father was walking in. He was startled. He was thinking: What is my daughter doing in the men’s room? Go back and answer him.

59. Struggle halfway between heaven and earth.

60. How would you look with three javelins to the heart?

61. Would they tug you closer to earth, or closer to heaven?

62. Were the javelins made of terebinth wood?

63. When was the last time you checked the family inventory?

64. How many sons does your father have?

65. And who will be father after him?

In “The Soul of the Stranger,” Joy Ladin describes re-reading the story of Abraham after transition: she “suddenly saw…a kindred spirit, a father who, like me, overturns his life and family to become the person he needs to become.” In this way, queer reading of scripture is a matter of survival, turning a paradigm of (literal) patriarchy into a path forward for a transgender parent. Lavery’s reworking of Absalom, the rebellious son mourned by the father whose own soldiers murdered him, seems to be about survival as well: the need to turn away from those who cannot see you except as an object of mourning.

I thanked Ladin after her reading, telling her that her work was an inspiration for my own journey into scripture as a gender nonconforming person. She told me that the only way to read Torah is in community, with other voices to guide and challenge you on your reading, each contributing a layer of interpretation to the text. This was days before the reckoning with COVID-19 transformed New York, seemingly overnight, into a city of isolates; now many of us are experiencing the “being alone with God” that Joy Ladin described in her childhood, the solitude Julian of Norwich knew in her chamber, the eerie sense of rapture Daniel Lavery felt walking through empty streets. Yet in drawing together these texts I felt, if not a sense of community, one of solidarity—a common wayfinding in search of various shores. We’re all looking to get to the other side of something right now. Narratives of transition and transformation remind us that, even in the face of unfathomable bewilderment, we are capable of learning who we truly are.

Jude Wetherell is the Program & Development Coordinator at Intersections International.