The last couple of months have shown us in unprecedented ways the connectedness of our global family. Though international travel has come to a near standstill in an attempt to stop the spread of COVID-19, the lives and challenges of people in other parts of the world have rarely felt as close and relatable as they have in these past months.

This notion of “We’re all in this together” has long been identified by LGBT people worldwide as a source of strength and empowerment. The International Day Against Homophobia, Transphobia and Biphobia (IDAHOTB), observed every year on May 17, serves as a reminder of the universality of our hope for a world without discrimination and hatred. Originally intended to commemorate the day when the World Health Organization (WHO) in 1990 declassified homosexuality as a mental disorder, it has grown into a worldwide celebration of LGBT life that is recognized in over 130 countries.

The United Nations—the central entity working for peace, security and human rights worldwide—is increasingly focusing on LGBT issues and, in 2018, appointed Mr. Victor Madrigal-Borloz as the Independent Expert on Protection Against Violence and Discrimination Based on Sexual Orientation and Gender Identity. According to his specific mandate, Mr. Victor Madrigal-Borloz is tasked to assess existing international human rights protections and their ability to adequately protect LGBT people from discrimination and violence.

We applaud this commitment by the international community to ensuring justice, equality and safety for all people, including LGBT individuals.

Watch this recent UN video on freedom to love, created in celebration of the International Day Against Homophobia, Transphobia and Biphobia, or this virtual event hosted by the UN LGBTI Core Group. 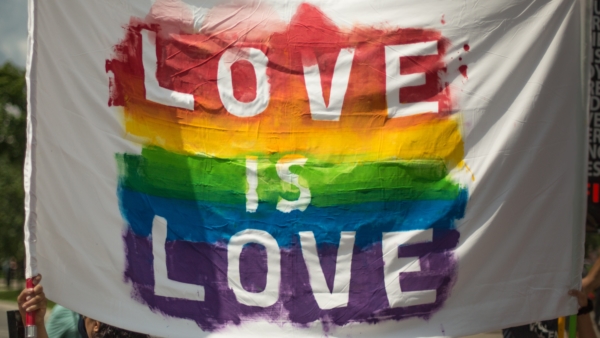 Featured image: lazyllama via shutterstock.com (Supporting hands make heart sign and wave in front of a rainbow flag flying on the sidelines of a summer gay pride parade)
Image in text: 42 Love via pexels.com (White and Multicolored Love Is Love Banner)