June of 2019 saw celebrations across the United States marking how far the country has come on LGBT rights. It’s hard to believe that this year’s World Pride events in New York City—lasting an entire month, bolstered by innumerable corporate sponsorships and centered on a parade that went on for nearly twelve hours—began with a few rowdy bar patrons fifty years ago advocating for their right to gather on a Friday night.

On the glittery, rainbow surface, it may seem that the LGBT community has found full acceptance here in the United States. Yet a shifting political climate and a rise in hate crime remind us to stay watchful—and to pay attention to developments in countries where extreme-right politics have begun to fully take control.

In 2019, Poland is a prime example of extreme right-wing politics joining with religious messaging to produce an extremely hostile anti-LGBT movement. The level of anti-LGBT violence and harassment in Poland might seem unimaginable in the contemporary US—yet in many ways, the countries share a similar political climate. By looking to Poland, can LGBT Americans gain an understanding of how such a heightened climate of state-and church-sanctioned violence has arisen?

In late July 2019, Przemyslaw Witkowski, a 37-year-old journalist, and poet, was cycling with his girlfriend in the southwestern Polish city of Wroclaw (Breslau). According to his Facebook page, it was there that he spotted homophobic graffiti on a wall—along with the Celtic cross, often used as a symbol of white nationalism.

A group of men standing nearby overheard Witkowski expressing his disgust. The couple rode on, but one of the men later caught up with them, asking Witkowski whether he liked the graffiti. When he said, “No,” the man broke his nose.

Not long before this attack, 1,000 pro-LGBT marchers in the eastern city of Bialystok faced hundreds of protestors chanting homophobic slogans and throwing firecrackers, rocks, and bottles. Police fired tear gas and arrested 77 people.

Far-right propaganda backed by the Polish government and the Catholic Church is fueling this rise in anti-LGBT violence across the country—with the support of right-wing media producing false and hateful reporting.

Poland is following in the footsteps of its neighbor Russia by using propaganda to instill fear into the public with predatory accusations against the LGBT community, such as equating homosexuality with pedophilia. The rise in hate toward the LGBT community and protests against LGBT gatherings are a direct result of these efforts.

The Catholic Church in Poland exacerbates this violent climate by actively preaching against LGBT identity. According to the Pew Research Center, 87% of people in Poland identify as Catholic; the rhetoric of the Church has a strong influence on Polish public opinion. Thus, when an archbishop in Poland warned of a coming “rainbow plague” amid ongoing tensions in the country over LGBT rights, it was heard by the majority of Polish people.

Marek Jedraszewski, the Archbishop of Krakow, made this remark during a sermon in early August to mark the 75th anniversary of the Warsaw Uprising. “We also know that our land is thankfully no longer affected by the red plague [a reference to communism], which does not mean that there is no new one that wants to control our souls, our hearts and minds,” Jedraszewski said. “This new plague would be not Marxist, Bolshevik—but born of the same spirit, neo-Marxist. Not red, but rainbow.”

This anti-LGBT rhetoric permeates right-leaning Polish media. The daily Gazeta Polska—seen as “a friend to the government”—announced this summer that it would enclose “LGBT-Free Zone” stickers with its paper, an initiative that has been applauded by other members of the conservative media. The paper distributed the decals with issues in late July, before a court-ordered them to be pulled from circulation. For many in Europe, this campaign was reminiscent of anti-Jewish stickers introduced by the Nazi party in Germany in the early 1930s. Yet government officials in at least 30 towns, villages and regional assemblies throughout Poland have declared themselves to be “free of LGBT ideology,” incited by the legitimization that the press and other public institutions in the staunchly Catholic country have provided to the anti-LGBT movement. 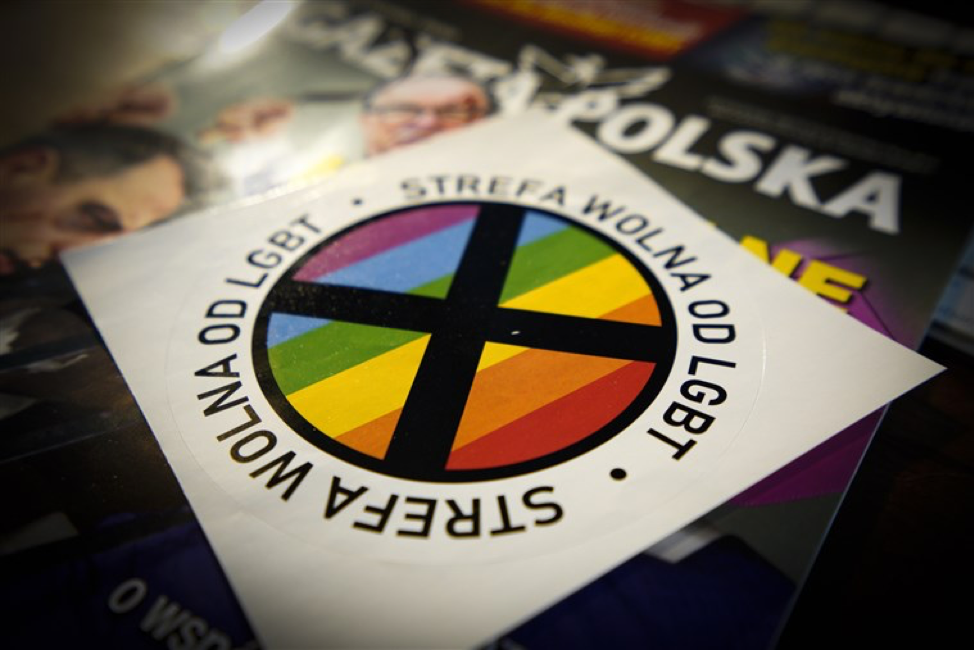 Human rights activists are trying to step in to help, organizing movements to advocate for the LGBT community and social media campaigns to counter the propaganda spread by the government, media and Catholic church. The spread of #jestemLGBT (#iamLGBT) on Polish-language Twitter, Instagram and Facebook show that there are still millions in support of LGBT rights in Poland.

According to Human Rights Watch, conservative PiS [Law and Justice] party leaders have often “misrepresented efforts to advance gender equality and end discrimination as attacks on ‘traditional’ family values.” While many neighboring European countries have legalized same-sex marriage or are moving toward doing so, both same-sex marriage and same-sex sexual activity remain illegal in Poland.

Archbishop Jedraszewski’s sermon, delivered in the medieval St. Mary’s Basilica to commemorate the 1944 Polish resistance operation against the Germans that resulted in hundreds of thousands of deaths, took advantage of a somber anniversary to forward an anti-LGBT agenda. “Words like these shouldn’t have been said by anyone. Especially not by a priest, not by a bishop, not even by any decent Christian. That is why it is so outrageous,” theologist Jaroslaw Makowski told Polish TV station TVN. “At the same time, it shows which direction the Polish church is heading toward.”

At this moment, it seems that the anti-LGBT movement in Poland will only continue to gather strength. With extreme groups influencing the government and a growing socio-political divide, matters will likely get worse before they get better. Here in the US, we must keep the Polish LGBT community in thoughts and prayers, and advocate with voices loud enough to be heard across the world. But as we watch the descent of Poland into an anti-LGBT frenzy, we must also continue to advocate at home for the rights of LGBT Americans. With a similar right-wing resurgence ascendant in the United States, Poland provides a cautionary tale for what may happen if we lose the gains made in half a century of struggle in the LGBT movement. We must exercise our freedoms to the fullest extent if we don’t want to see fifty years of progress erased.