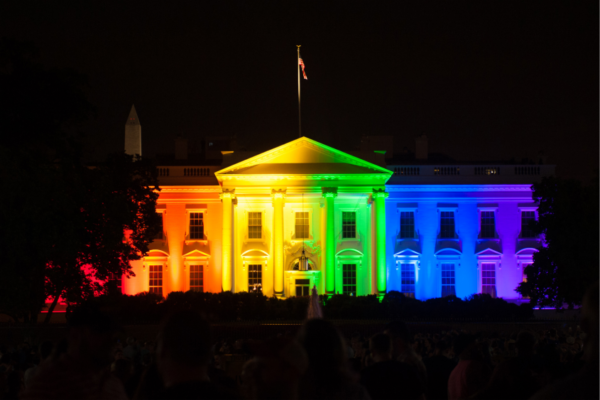 Five years ago today, the White House was lit up in rainbows.

On June 26, 2015, the United States Supreme Court issued its decision in Obergefell vs. Hodges, declaring with a 5-4 majority that same-sex marriage was the law of the land. Across the nation, Pride Month celebrations took on a deeper layer as LGBT communities remembered the generations of struggle that had led to this monumental victory. Millions of LGBT Americans and allies were moved by the words of Justice Anthony Kennedy, who wrote the court’s majority opinion, excerpted here:

“No union is more profound than marriage, for it embodies the highest ideals of love, fidelity, devotion, sacrifice, and family. In forming a marital union, two people become something greater than once they were. As some of the petitioners in these cases demonstrate, marriage embodies a love that may endure even past death. It would misunderstand these men and women to say they disrespect the idea of marriage. Their plea is that they do respect it, respect it so deeply that they seek to find its fulfillment for themselves. Their hope is not to be condemned to live in loneliness, excluded from one of civilization’s oldest institutions. They ask for equal dignity in the eyes of the law. The Constitution grants them that right.”

A half decade after Obergefell, we remember the joy felt on that historic day with a tinge of sorrow. The conservative backlash to the federal recognition of same-sex marriage, and to the broader visibility of LGBT people in mainstream culture, was part of the mechanism that has ushered in an era of precarity for LGBT rights—particularly for trans and gender non-conforming people, who find themselves in the crosshairs of a new culture war.

Echoes of the 2015 victory were felt earlier this month with the Bostock vs. Clayton County Supreme Court ruling, determining that Title VII of the Civil Rights Act of 1964 extends to workplace protections for LGBT people—a surprising and emotional win issued by conservative-leaning court with a majority opinion written by Justice Neil Gorusch, a Trump appointee. But the fight for equality and dignity didn’t end with Obergefell, and it won’t end with Bostock. With a recent rollback of healthcare protections for trans and gender non-conforming people and hundreds of pieces of state legislation targeting LGBT Americans, there is much work to be done. Still, the memory of the White House illuminated in the colors of the rainbow remains a powerful symbol of hope—that this country is capable, on a legislative, judicial and cultural level, of recognizing the dignity and humanity of all relationships and all people. In another five years, we pray we’ll be commemorating more progress.