Home Voices Coming Out Muslim: A Believe Out Loud Review
by Benjamin Ohene

Towards the end of 2019, Believe Out Loud had the opportunity to view Coming Out Muslim, a performance by the creative duo Terna Hamida Tilley-Gyado and Wazina Zondon. 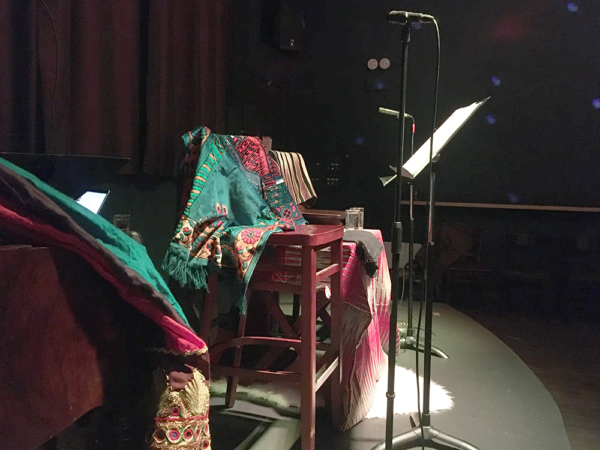 Chatter from the packed-in crowd produces a hum in the air of the performance space. Tangles of legs line the aisles in an effort to get comfortable for the two-hour show. On the stage are two chairs and two microphones with a small table between them. The table has a patterned cloth draped over it. Red and yellow lights illuminate the large room with stars patterned on its walls.

After a few minutes, Terna and Wazina step onto the stage and greet the excited audience; a sign that the performance is about to begin. The duo paints a world of emotions in the crowd’s mind through captivating speech, dance, and demonstration. Accompanying the duo’s performance is a live musical scoring by singer, Alsarah. The performances blend together to create a complex experience of humor, longing, melancholy and hope. 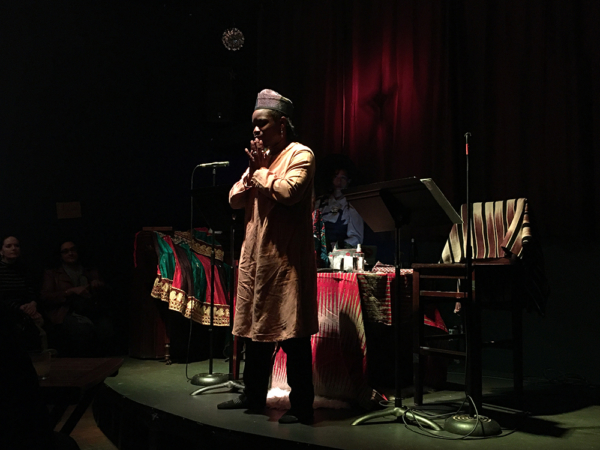 Terna Hamida Tilley-Gyado stands on stage at the Starr Bar in Brooklyn.

Coming Out Muslim is a storytelling project about faith, family, love and coming to terms with sexuality. Terna and Wazina offer a counter-narrative where there had not been one before. The duo speaks on experiences of racism, xenophobia and islamophobia that have been experienced by themselves, but resonate well through the LGBT community. A mixture of harmony and clash radiates from the dialogue that eloquently demonstrates the struggle of being a child of immigrants and growing up between cultures.

After the show, Believe Out Loud had the chance to briefly interview the duo:

BOL: It was stated that the first show took place in 2011. How did this project come to be? How many shows since the initial?

T&W: Prior to the opening of our first show, Terna and I were involved in facilitating a study group series entitled Interrupting Islamophobia for NYC-based educators in preparation for the 10-year anniversary of 9/11. We wanted to ensure that they were equipped with a deep understanding of not just the faith but also the intersections of experiences/systems that Muslims experience. Here was where we met Laura Marie Thompson, a theater maker and educator who worked with us to first create a visual gallery and then prepare for our October performance.

We simply thought we would perform for three evenings for friends and loved ones in the East Village at the herstoric WOW Cafe and theater. By the grace of Allah, we had a friend who was working at Colorlines who wrote a little blurb about us – that coupled with the reception and word of mouth – we got our start. We have continued based on invitations and in the last 8 years have lost count of performances which range from small/intimate local spaces to large universities. Terna would say we have certainly performed for 1000 people.

BOL: What’s the next step?

We are committed to continuing to share our work and engaging with and within communities in conversations on how to affirm and heal queer people of faith. When we reflect on the state of the world, rampant islamophobia reminds us of how much misunderstanding there is and amidst all this heartache, we are charged to continue to proudly say that Allah made us queer. Terna and I have been exploring a next project loosely entitled Faith in Love/faith: in love.

This project produces waves of emotions and realness that tells true and relatable stories for LGBT individuals, people of faith and lost persons alike. Keep a lookout for Coming Out Muslim and future projects by this ground-breaking duo.